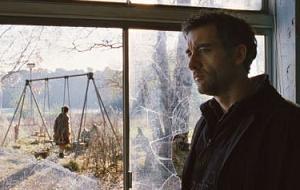 I remember it all too well. My friend and I driving to our local Carmike to see Children of Men, making small talk and token, "I've heard some pretty good things about it," exchanges all the while. "Pretty good things" doesn't do what I experienced that day justice and it being my first encounter with digital projection only heightened the experience. The visceral rush of Alfonso Cuarón's film is undeniable, as is the film's lasting impact on me. To this day thoughts of the picture cloud my mind on a semi-regular basis to the point that I feel an awkward connection to it despite it reflecting a world so outside my own-where a literal collapse of society has pitted man against himself, his surroundings and his beliefs.

By now, the movie's premise is well known-the women of Earth can no longer procreate, making our demise inevitable. Usual progressive benchmarks, like celebrating the life of the world's oldest living person, have been replaced with their respective counters; we now mourn the loss of the world's youngest man-a highly televised testament of our own mortality. Of course, the individual has to come to grips with their own death at some point during their life. What Cuarón has done is created a dystopian world where mankind as a whole must deal with the approach of their final days. According to Cuarón, we won't go down together.

When confronted with a scenario like worldwide infertility, most people are going to want to know the why. Subsequently, Children of Men has been criticized for sidestepping this question, instead focusing on how people as a whole react to such grave news. This narrative movement recalls two works of Ingmar Bergman whose The Seventh Seal and Shame both serve as humanist reactionary tales of characters dealing with possibly-apocalyptic adversities. Cuarón's picture follows suit.

In CoM, our lead Theo (Clive Owen) is little more than a pawn thrust into a virtually unwinnable game. Being a largely average individual who drinks heavily and smokes regularly ("They're not working," he quips about death), Theo is the working-class face of the future. The world has literally gone to hell, leaving only London as a remaining functioning city; "functioning" being used loosely here. The first shot of Cuarón's film transports us to a world deprived of cultural prosperity. Technological progression has continued, sure, but the streets of London are polluted, bomb-battered and largely chaotic. Cages and camps house illegal immigrants and are on full display to the working world. Repenters gather in bunches in public squares and beg forgiveness. Others simply, "Don't think about it."

The movie has many strengths, though its insistence on making its story about people and not about finding some pseudo-Science Fiction cure is an inspired decision. CoM's world is a bleak one indeed, but the bleakness is incredibly realized. The CGI effects blend seamlessly with the other backgrounds and the lens of veteran DP Emmanuel Lubezki explores all of this as curiously as possible. While the first fifteen minutes of the film are purported to establish our own perspective and familiarity of this not-so-distant future (being a tad heavy-handed in the process), a major discovery soon propels the narrative forward. In this, action sequences present themselves but never in an obtrusive way; they simply flow naturally with the story, adding weight and concern to every gunshot and bomb blast. At the center of it all is Theo who illustrates how an average man, not a divine savior, may someday make all the difference in the world...literally.

Theo's presence in every scene (and almost every shot) presents a difficult task to our filmmakers, who handle it gracefully. Because of this movement, flashbacks and expository scenes concerning the cause of the infertility epidemic would be cheap and meaningless and are thankfully not included. Instead Cuarón layers clues to the cause throughout his film by way of implication and immaculate mise-en-scène. Still, these hints in no way surpass the film's thematic focus in importance and the picture decidedly concerns itself with the sociopolitical ramifications of a situation such as this. The commentary here is rich and plentiful. Cuarón doesn't so much criticize those who act irrationally as much as present them, insinuating there's no right way behave when facing a worldly collapse. Can anyone really say otherwise?

Though developmental dialogue exists, the picture is largely a visual experience both in the way it implies theme and the interesting ways Lubezki frames action. The new Blu-ray transfer from Universal only adds to the movie's most visceral concerns, allowing a full array of detail to be present in every frame. The reality is, little negative can be said of the release, though the CGI does look more apparent now that the image as a whole is so pristine. Still, incidents like this are few are far between and the effects still rival the best I've come across. Skin tones look natural and accurate which captures facial expressions ranging from Theo's indifference to the public's anguish quite well. Focal depth within the frame is also of the essence, as it evokes more believable, inhabitable space for our futuristic counterparts to exist within. In many ways, London has never looked more beautiful or terrifying on film. Of course, what we hear of an environment is as essential to understanding it as seeing it is and, thusly, the audio track excels accordingly. The movie's greatest feat might very well be its vision in creating a conceivable cinematic world, which this BD transfer conveys marvelously. Fans of the movie might see this one as worthy of a double-dip. The image and sound are that good, as is the film.