After seeing the strangely effective trailers that feature a stirring abduction, the public took to theaters en masse and made Taken one of the first big hits of 2009. Seeing as many as 3,184 locations, the fight-heavy film went on to gross $144.6 million domestically. Fans will find that it plays well on the small screen, especially those with a good sound system - I'd recommend turning it way up. 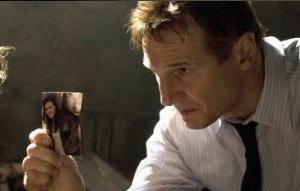 At a glance, the film can be summed up simply: blah, blah obvious expository stuff, blah, blah, straight-up badassery, fin. It can be said that Taken is solid for what it is, assuming that it is intended to be a Bourne-type genre flick, which I argue it's not. The film I witnessed was stuck somewhere between homage and cliché, clearly throwing nods to genre predecessors but without any explanation as to why. What we have here isn't genre deconstruction-or even experimentation-but rather a recycling of action motifs, chases, and camera techniques. Everything is laid out plainly, as if telling the viewer, "These are the different methods used in such movies, you can decide what works and what doesn't." Truth is, the final product is hit and miss in a technical sense, though this conglomerate of craft offers a wide array of ways to see men killed.

Yes, when you whittle the story down to basics, a lot of lives are taken in the name of love. Not just any love, mind you, specifically the love a father has for his daughter. Of course, parental compassion is another borrowed idea and films from Dancer in the Dark to Commando to Kill Bill have acted as exposes in demonstrating the lengths parents will go to in order to protect their young. Most of these pictures present this drive as a sort of intrinsic mechanism exclusive to family bonds. Taken does this as well, but, in order to squeeze it into an action-packed narrative, makes the father a killing machine as to dismiss anything the mother (or the ultra-rich stepfather) could possibly do.

Liam Neeson plays retired covert ops specialist Bryan Mills, a still seasoned spy who doubles as the world's most overprotective dad. Throughout his career Mills has detached himself from his daughter Kim (Maggie Grace) and still pines for the days when she was an innocent youth. His job has made him privy to the world's seediest occurrences and he projects these experiences in his treatment of her. Nonetheless, she is decidedly depicted as innocent, her virginity being brought up several times throughout the film.

Aside from his worries about Kim, Mills lives in the past, still calling his ex-wife by the name "Lennie" (she now prefers "Lenore") as if time stopped during his absence. It hasn't and everyone reminds him of this ad nauseum. In an act of faith, he begrudgingly allows Kim to summer in France with a friend. Naturally, things go awry. The girls are kidnapped by human traffickers and mayhem ensues. Mills vows to find his daughter and inflict revenge upon her captors, relentlessly hunting them down in an awkwardly progressing chain of events. He uses his self-described "particular set of skills" to lead him from one adrenaline-soaked venture to the next, leaving a trail of dead as his calling card. At times it feels like the plot takes another tangential turn in order to give Mills the chance to raise the picture's body count, to which he happily obliges.

The action itself is well done as a whole, though I wish director Pierre Morel would demonstrate more confidence in one methodology instead of sporadically alternating the composition of action scenes. One moment he relies on blasé shaky cam shots before switching to lengthier, atypical medium ones. The latter allows for a more interaction on part of the viewer, affording fight sequences the visual clarity and nuance that they deserve, though I'd venture to say Morel doesn't realize this or, rather, doesn't accept it. Instead of a calculatingly composed genre flick, we get a bit of everything across the stylistic spectrum, laid out as plainly as a department store display - an item or two caught my eye, sure, but ultimately I was just window-shopping.