Meet Harvey. Harvey is sad and for good reason. As a professional he's failing, being given the brush off by his boss in order to make way for a younger way of thinking. As a father he plays second fiddle to a suave stepfather who's closer to his own daughter than he is. As a man he's lonely. The actuality of Harvey's situation is that life seemingly can't get any worse, as, on top of everything, he's now staying in London by himself while his family rests comfortably together in a rented house as they await his daughter's wedding. Throughout it all we're asked to feel empathy for our lead, which is something I couldn't muster, personally. Instead, I felt bad for the actor playing him-Dustin Hoffman. Though always the entertainer, the public didn't give Hoffman or Harvey much of a chance, and the movie only saw a peak of 1,108 screens, pulling in $14.8 million domestically. 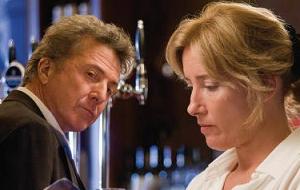 Going into the movie, I played the role of the optimist. Approaching films with inflated expectations is not a practice I condone, or typically practice, but in the case of Hoffman, I can't help but be somewhat excited. The aging star still has enough charm and chops to carry a picture on his shoulders if afforded the opportunity to, you know, actually act. In Last Chance Harvey something is off. Not long after Hoffman's character is introduced, I came to realize how imbalanced the film is in terms of the emotional resonance it aims for and how it attempts to earn it. Harvey is upset so we're supposed to empathize but given no reason to do so (other than the fact that he's the lead). The first act relies heavily on this principle and mostly consists of expository sequences that show just how socially detached he's become. What's missing is any semblance of drive on Harvey's part, who instead hardly combats what life throws his way, making him more pathetically stubborn than sympathetically likeable.

Whilst in London, Harvey meets Kate Walker (Emma Thompson), a single woman whose friends are insistent on setting up with a man-any man. Of course, Harvey has to overcome, not only his personal burdens, but also the cultural differences between he the American and she the Brit. At times, the film shows shades of ambition, almost as if attempting to become Hoffman's Lost in Translation, but without the evocative use of scenery, clever dialogue, or thematic depth. The customary gap between Americans and Londoners is brought up too often for how little is said in way of social commentary and, by picture's end, becomes more of a geographical obstacle (a clumsy narrative ploy) than a humanist one (something insightful).

As expected, Hoffman and Thompson deliver, though it goes without saying that we've seen better work from them both. Overcoming the clichéd frivolities of the script (complete with the ever-tiring "break ‘em up so we can get ‘em back together" motif) proved too much for the pairing, despite their obvious talents. The awkwardly heavy mood doesn't help any, causing the movie to feel like a romantic comedy that forgot to be funny. [Insert obligatory "take a chance elsewhere" joke here]