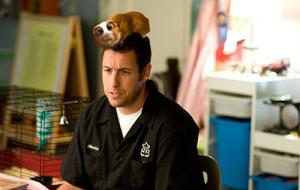 Adam Sandler and Walt Disney - two names synonymous with entertainment, though their specialties lie at opposite ends of the cinematic spectrum. While the Disney Corporation has delighted families for decades, Sandler's target demographic has usually been a bit older; his work a bit more aimless. Still, this formula - seemingly awkward on paper - led to moderate box office success, performing almost up to par with other Sandler starring vehicles. Bedtime Stories, which opened during 2008's holiday season, grossed over $109.9 million at a peak of 3,684 screens.

There's an undeniable power to the art of storytelling, an idea that makes up the film's narrative aim - an aim that's loose and careless. In order to qualify the movie's shortcomings, director Adam Shankman and his writing team (Matt Lopez and Tim Herlihy) rely on the story-within-a-story motif, but with little success. To clarify, the movie's main plot exists entirely in a story told by Marty Bronson (Jonathan Pryce), a deceased hotelman whose son Skeeter (Sandler) looks to carry on his warm legacy. We learn that Marty lost his beloved family-friendly hotel to big business, though Skeeter has been kept on as the maintenance man. It's a contemporary prince-in-waiting tale in which Skeeter is promised as a youth that he'd someday run the now glitzy hotel but has since been reduced to janitorial work. He voices his frustration through the bedtime tales he spins for his niece and nephew while their mother (his sister) searches for a new job in a neighboring state.

Naturally, Skeeter's stories parallel the throes of his current job situation, which is necessary as he's explaining his plight to children. He's in need of a sympathetic ear and knows the children will accommodate. This is all well and good. The narrative problems don't start until life begins to reflect his stories, a movement that goes unexplained for the duration of the film. Instead of incorporating some sort of magical element, Shankman seems intent on letting the line, "It's a story, anything can happen," qualify the movie's tweaked reality. Because the film is being told from the perspective of Marty (who's dead) we are technically watching the filmic equivalent of a bedtime story, though this movement is lazy and insults the audience's intelligence regardless of their age. What could have been creative escapist fare ends up as obvious and formulaic; it does nothing to distinguish it from other genre outputs. Insights involving the depths of a child's imagination and how they use it to shape their realities are ultimately smothered by Sandler's persona or what Disney will allow of it. And, for the record, Sandler-lite has a more off-putting taste to it than the full calorie version.

As a whole, Disney does an average job in its BD treatment of Bedtime Stories, though the film does little viscerally to merit the upgrade. Backgrounds and sets are often plain, free of complexity, and the manner in which they're filmed blurs any sense we can get of focal depth. The image itself has a fair amount of grain, opting for a more natural look as opposed to a glossy, artificial one. Still, the stark imagery and overall lack of depth stir up a feeling of artifice, as if the aesthetic is decidedly cheap. Of course, a film does not have to be visually complex in order to look good on Blu-ray - I've Loved You So Long being a prime example. Being free of décor, Sony still was able to evoke detail and space through their Blu-ray transfer, a task Disney couldn't duplicate. There are action sequences that spawn from Skeeter's stories, but even these don't seem to be given adequate consideration by the filmmakers, which, again, hinders the impact of the BD transfer. Really, the audio track is the only standout element of this release and, due to the simplistic nature of the action scenes, is only experienced sparingly. The overall quality is a step up from its DVD counterpart, a copy of which is included in the BD casing.