After directing about forty films to this point, it is safe to say that Woody Allen has, for better or worse, carved a niche for himself in the film industry. The reason I qualify it as a potential negative is that he is often accused of making, "the same film over and over again," which can have a limiting effect on his fan base. While I don't necessarily agree with this assessment, I feel that it would be of little concern to Allen; his band of loyalists will always take notice of his new releases. This was the case with his latest, which managed to gross over $23.1 million domestically at a peak of only 726 screens. It also did respectively in, of all places, Brazil. 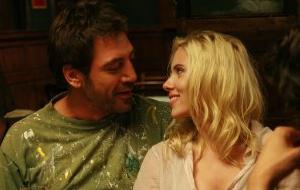 I find that the title of the film can seem mysterious at a cursory glance though its intent becomes clear as the picture endures. Vicky Cristina Barcelona describes not only our two female leads (played by Rebecca Hall and Scarlett Johansson, respectively) but a city as emotional and interactive as any character. It exudes warmth, life, and expression. It is during a summers stay with a relative of Vicky's that the two young Americans experience the culture of the foreign land. It is made evident through narration, and later actions, that their dispositions on love greatly differ. The beautiful backdrop of Barcelona serves as a catalyst in widening the void between them.

The girls themselves are your typical twenty-something intellectuals, indicative of typical Allen characterization but with a pinch of contemporary youthfulness. They are very self-reflective and aware, though the bombardment of emotional stimulus brought on by their new surroundings begins to disorient them. Naturally the friends came to Barcelona with expectations, expectations centered on their own principles. However, the romantic city has other plans, distorting their assumptions of the trip. While Vicky begins seeing faults in her traditionally ideal relationship with her fiancé Doug (Chris Messina), Cristina becomes immersed in culturalism, due in part to an affair with painter Juan Antonio (Javier Bardem). Her passion and impulsiveness strikes up conflicting feelings in Vicky, who is not above making passive-aggressive jabs about it to Doug.

Plot points aside, the movie actually transcends your typical search for love, focusing more on how social beliefs can lead to compromising one's own happiness. There are shades of influence from Truffaut's masterful Jules et Jim, in which the late Frenchman also challenges the concept of relationship norms. Both pictures demonstrate, to extremes, the lengths we will go to find happiness in the ever-fickle realm of love. Allen certainly doesn't supersede the efforts of Truffaut but instead utilized similar elements in a relevant, provocative way. For a man that puts out films with such frequency, it's impressive that he still can approach this level of quality after all these years.