It should be no surprise that this year's presidential election saw unprecedented voter turnout, and even less so that Hollywood would eventually try to bank on it. Somehow, they missed their mark. Despite the rather raucous political climate this year, Swing Vote hardly got people to the theaters, as the voting idiom puts it, "early and often." It failed to exceed its debut distribution of 2,213 screens and managed to gross only $16.2 million over a rather piddling three month run. 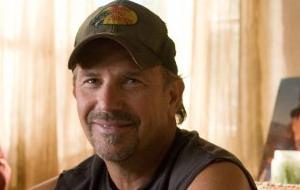 Commendably, director Joshua Michael Stern aimed higher than making a trite, politically slanted rom-com and instead aimed to show the comedic shortcomings of bipartisan hypocrisy. The task of using the modern political arena as a backdrop for laughter can be a fairly daunting one though hardly an impossibility. Contemporary television personalities have been successful in calling attention to the foibles of politicians but generally in an anecdotal manner. Stern opts for a different approach. Instead of focusing on the person he instead strives to reprimand the system with his tongue firmly planted in his cheek. In order to effectively communicate this, the electoral machinery must be stripped down to its most basic components. That is, the individual. By placing the electoral weight on the shoulders of one man, it becomes rather easy to show the lengths the parties will go to in order to win. This is exactly the scenario the movie presents but it's a fundamentally flawed one nonetheless.

The man in question is Bud Johnson (Kevin Costner), his name more or less sums up his character. He drinks, works in an egg factory, drinks, and sleeps...drunkenly. His constant is his daughter Molly (Madeline Carroll) who basically pampers and takes care of Bud, their relationship reflecting a rather odd mother-son feel; the notion is more than a bit perverse. Perhaps the writers (Stern and his cowriter Jason Richman) thought this was an interesting comic motif but I hardly understand how such a truncated role-reversal could be passed off as anything but misguided. This point of mine is backed by the script's later, melodramatic developments. It's a rather cheap and pointless digression, one that strives to fill the picture's large emotional void.

Molly is a devout student that cares about the impending election and more so that her father participates in it. She registered him to do so online, an act he was unaware of. Similarly, after he had passed out in his truck on that fateful election night, she was the one who snuck into the voting booth to cast his vote. Her best intentions aside, an electrical snafu occurs, freezing Bud's vote, the first in a series of inexplicable events that lead us to the film's premise. The electoral vote is tied, his county's vote is tied, and now he alone, via a legal "revote" will decide the presidency.

Immediately and predictably the film tailspins into recreating the frenzy of the 2000 recounts but some aspects are missing, namely the recounts themselves. If a situation even remotely similar to this came to fruition lawyers and officials would certainly do everything in their power to take the responsibility away from a single man. However, showing these intricacies, or even delving somewhat in realism, seems too ambitious a scope for our filmmakers. They are content with making shallow quips about campaign promises and little else. The two candidates Boone and Greenleaf (Kelsey Grammer and Dennis Hopper respectively...guess which is the Democrat) are lackluster composites of their party's most obvious stereotypes. They constantly shift their platforms to appease Bud and somehow these drastic changes (Dem. Greenleaf goes pro-life for example) have little affect on the national scene. Instead of being outraged by how loosely the candidates stand by their policies the public turns on Bud himself. All of these filmic misfires lead to some rather dull observations as Stern fails to see the possible bigger picture of his own creation. What we're left with is the message that your typical politician will do anything to get elected and that every vote counts. Neither idea inspires thought, which parallels how none of the jokes inspire laughter. The average viewer would benefit taking a page from Bud's book: stay home, drink, and skip this movie.