Perhaps it comes as no surprise to some, but the popularity of the Swedish-based 1970's pop mogul ABBA has not waned despite their parting ways in the early eighties. From my admittedly limited experiences with the group's work, I can see the broader appeal of their rather simplistic lyrical hooks put to melodious beats, even if it isn't my cup of tea. The thorough success of this film adaptation of the popular Broadway musical acts as a testament to the nostalgically breezy nature of the featured tunes and the public's ability to equate their charm with happier times. It did a hearty $144 million dollars domestically during its theatrical and has recently gone on to topple Titanic in the UK, becoming the highest grossing picture of all time there. If you need to read that last bit again, I'll understand.

Like many of the songs featured throughout, Mamma Mia! has an air of dream-like artifice to it. The movie is a decidedly light-hearted affair with over-saturated pastels filling the frames, trying to evoke a bright and light spirit in order to engage its audience into toe-tapping escapism. 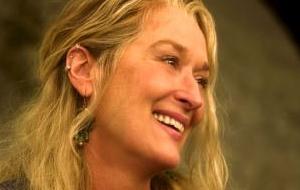 As the picture opens, our plot is revealed at a rather thoughtless pace, self-consciously setting the stage for the next musical number instead of establishing anything meaningful. We are informed that young Sophie (Amanda Seyfried) is to be married on the Greek island where our story is set. Here her mother Donna (Streep) runs a hotel, which over the years has come to fall into financial trouble and structural dilapidation. Through reading her mother's diary, Sophie discovers her mother had entertained three separate gentleman during a period of time acceptably distanced from her own birth that any could have fathered her. In a case of self-doubt and identity confusion, Sophie contacts the three men, unbeknownst to Donna, inviting them to her wedding. The rest of the film focuses on recollection of past the effects of time (twenty years to be exact) on characterization. All this, of course, is complete with melodic accompaniment, which seems to take precedent.

The structure of the film is rather straightforward, contrasting the present with tangential musical numbers in order to show the circumstance of how matters came to be as such. Notions lifted from Greek comedies are abundant.

A relatively thin concept seems to be stretched even more so as the picture goes on and various, rather naked, subplots emerge. The story clumsily dances onwards though, as the men become enchanted by their would-be-daughter and the chance to finally be a part of her life. Meanwhile, the background players, in the spirit of a Greek chorus, pop in during musical number to interject a livelier, more festive feeling to the picture. They also make themselves known by way of little self-aware commentaries, projecting the idea that they too are merely watching and participating as the viewer would. Still, this motif greatly handicaps the picture as it assertively denounces the movie as very simple "fun" which many won't find it to be.

Other problems exist. The performances are pretty equally hit (Seyfried, Streep) and miss (Brosnan...wow, Pierce). The flimsy introductions of many bits too often remind us that these songs are clearly independent of the story though not in as scattershot a manner as Julie Taymor's abysmal Beatles-themed Across the Universe from last year. One cannot help but think efforts could have been taken to make a more articulately cohesive film, thus allowing otherwise untapped audiences to become vested in it.

Even though challenges exist in bringing a staged musical to the bigscreen, it remains the director's place to make this transition a smooth one. Mamma's uncreative use of setting, prop, photography, and dance often makes it feel like simply a filmed play. It serves as a reminder that, sometimes, things should be left on stage.