I believe "fun" would be the best way to describe this festive romp, which hit theaters last June, peaked at 4,136 screens and totaled $215.4 domestically while also becoming an overseas success, where it even toppled Pixar's albeit superior WALL-E in terms of fiscal success. Despite my open preference to that adorable little robot, Kung Fu Panda is not without merit of its own, at least in some departments. 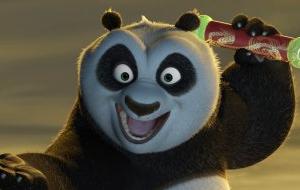 The story is a rather simple one and its clear that this film is vying for a more aesthetic and personable connection to its audience than anything else. Set in China, panda Po (voiced by Jack Black) longs to become something greater than what his father envisions. It's a tale of chasing one's dreams and believing in oneself, common considerations amongst children's fare but the virtuosity of the visuals will keep most entertained, or at least interested in what is to come next. It is also refreshing to see such popular actors as Dustin Hoffman, Angelina Jolie, Jackie Chan, Seth Rogen, and David Cross (to name a few) come together to voice characters in a rather aptly made kid's fable. Sure, the movie, as a whole, is lacking depth and weight but at the very least it will provide most families with a comfortable two hours of bonding time.