Along with many other moviegoers, I had actually forgotten about Fred Claus, a picture that had actually opened in theaters last November and hasn’t received DVD treatment until now. To its credit, Claus did have a fairly successful run at the time, grossing $72 million from as many as 3,603 screens. Warner Bros. has obviously timed the DVD release to capitalize on the holiday spirt. With a big enough advertising push, it should fare well, and its cast will certainly help its cause. 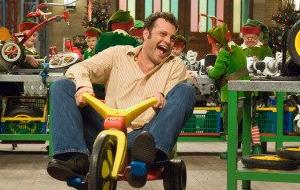 “Actors who only play themselves,” is a criticism that we hear all too often these days. Vince Vaughn is one actor that has certainly received his share of said criticism. Aside from a few stints elsewhere, Vaughn has rarely strayed far from the comedic niche he’s carved and, in doing so, has pigeonholed his range within the genre. Still, the audiences seem to remain affected by his gifts, which is certainly one of the reasons for this picture’s success.

In Fred Claus, Vaughn remains as identifiable as ever, launching into one of his trademarked rants before the title card strikes. It’s as we know him and nothing more. Here he plays the brother of Santa (played by Paul Giamatti), whose jealously and subsequent animosity has built into something horrible, or at least enough to disconnect from his family entirely. There’s some light strokes here dealing with sibling rivalry but director David Dobkin (Wedding Crashers) casts them aside momentarily to paint a familiar picture of a man with the usual personality faults, down on his luck, and in need of money. In order to obtain said financial assistance he takes a job at his brother’s fabled workshop, though he makes little moral effort to better himself. Instead his time his spent turning this foreign environment, one of unimaginable functionality, into something less foreign for him. His selfish motives deter the drive of the elfish workers who have now been exposed to the power of appetite thanks to Fred. An untimely revelation in the midst of C-Day, made especially so due to the arrival of Clyde Northcut (Kevin Spacey) who looks to shutdown toy production due to financial hardships.

In light of recent events, this final piece of information is probably more applicable today than it was even a year ago. Northcut is an efficiency expert of some phantom agency, one that holds power over all holiday givers. In a whimsical and unimportant manner he spouts off economic ideologies of downsizing, outsourcing and the like but makes no frame of reference in regard to our modern culture aside from these initial lines. While we must realize that this film was in no way intended to be an exposition on contemporary fiscal concern, it is a shallow act to touch base on these considerations for the mere sake of doing so. It becomes hard to take this picture in any way seriously after this point.

The rest of the movie is business as usual (read: mediocre family entertainment), which makes such an attempted interjection all the more awkward. While blanketing themes is hardly a new exercise, I’ve rarely seen it done in such an off-the-cuff manner. Nonetheless, any notion of insight is soon smothered by the same meandering musings of kinship and retribution that exist in almost all commercial holiday efforts. The movie itself becomes an actors’ piece due to its thin content and, since they have little to work with, it flounders greatly.