Getting the obvious out of the way: Speed Racer looks excellent. There’s a visceral impact to the film that is formed by a plethora of colors and sleek imagery, and it’s all thanks to the Wachowski Bros. and their new dual layer shooting technique.

Inspired by the original anime series, the effect adds a transcendent level of focal depth by allowing the backgrounds to remain as crystal clear as the objects and actors that populate them. The result is stunning and the DVD transfer certainly does the effort justice. 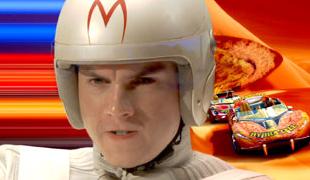 Unfortunately, innovation alone won’t sell a film to the public or the critics and both rejected it across the board. Despite the success the Wachowski Bros. obtained from their Matrix trilogy and even the modest theatrical success of another of their spearheaded projects, V for Vendetta, Speed Racer fell flat at the box office. The film peaked at 3,606 screens and grossed only $44 million, proving to be one of the biggest duds this past summer.

At the risk of remaining too true to its source, Racer disconnects itself from both typical narrative structure and traditional film language in general; a move suited more to the arthouse crowd than a children’s flick. Still, it remains a brave move to abandon typical editing practices as well as chronology and I, for one, applaud such audacity, even if it doesn’t truly work every step of the way.

The overall critical reception seemed rooted in referring to the film as a mere exercise in aesthetics, which is partly true but it misses the broader purpose of telling a children’s tale via means that can be appreciated by cinephiles while developing a new production method to boot. Of course, much of Racer’s future stock depends on how influential said practices truly become. Either way, the film should quickly become a cult success … and rightfully so.