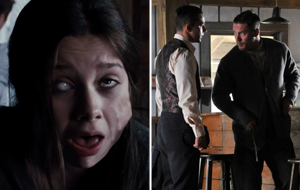 - The film has a good chance of appealing to teens and fans of the exorcism genre.
- Lionsgate boasts a successful history with the genre.

- The exorcism genre itself is typically very front-loaded.
- It opens one week after The Apparition, although there could be room for both given the overall lack of horror films this summer.
- The Labor Day weekend release date.  Halloween (2007) and The Transporter 2 are the only films to have opened with four-day grosses north of $20 million during Labor Day weekend.
- Its debut trailer generated 1,400 tweets compared to the 1,223 figure of The Apparition.  These aren't huge numbers, but horrors tend to rely on TV spots and viral campaigns to really get them pumping.

- A strong cast including Shia LaBeouf, Gary Oldman and Tom Hardy (the latter two of which will be coming off of The Dark Knight Rises).
- Films aimed at adults have generated respectable Labor Day weekend returns for the past two years (The American in 2010 and The Debt in 2011).

- Quite a bit of time has passed since Disturbia and Eagle Eye for Shia LaBeouf.   On top of that, will his fans be excited by a film set in the Prohibition Era?
- It could take an extra hit in its second weekend from the debut of Gangster Squad.
- The Labor Day weekend release date still hurts more than it helps as audiences hunker down after a summer's worth of spending money at the theater.

There are no additional changes on this week's forecast.