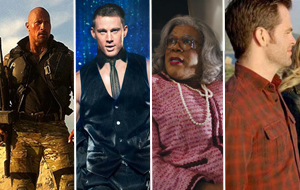 The last time the calendar fell on the same dates was in 2007 when Ratatouille and Live Free or Die Hard opened to $47 million and $33.4 million, respectively.  The latter opened on the preceding Wednesday.  The overall market gross for that pre-Independence Day weekend reached $155.4 million.

- Adding Dwayne "The Rock" Johnson to a cast has recently proven to be of benefit in Fast Five and Journey 2: The Mysterious Island.
- Channing Tatum is a bigger draw now than he was for the first film back in 2009, having starred in two of the top five films of 2012 so far (as of this writing).
- Opening before the July 4th holiday could help give it some extra traction.
- The shift in tone from the first film might attract older action fans and widen the demographic appeal.
- The trailers have been very well-received online.

- While not universally hated, the first film isn't something that most have clamored for a sequel to.
- The marketing seems less kid-friendly, a huge change from the promotional tone of its predecessor.
- The kiddie audience that helped drive the first film will have a lot of other options in the marketplace: Brave and Madagascar 3 will already be in release, while The Amazing Spider-Man and Ice Age: Continental Drift will be hot on its heels.
- The extent of Channing Tatum's role in this sequel seems to be up in the air.  His female fans will likely opt to see Magic Mike instead.

- Channing Tatum is proving to be a real draw this year.
- 21 Jump Street being rated R certainly didn't hurt its box office performance.
- Any woman with a pulse is going to want to watch this movie, its as simple as that.

- Channing Tatum vs. Channing Tatum.
- Will men agree to see it after women agree to see G.I. Joe?
- Its biggest enemy is going to be the screen count and whether they cap it with a moderate release of 2,000 to 2,500 or go all in with 3,000+ (if its available given how busy the box office will be).

- Perry still has a reliable audience to draw upon, and this could hold slightly better than his previous films thanks to the summer release date.

- This one's not adapted from a play.
- Its true that Perry's comedies usually perform better, but the fact that Good Deeds did so poorly is not a good sign for him -- especially since he has three movies slated for upcoming release.  Over-saturation could have an effect.

- Against all the summer blockbusters, a smaller drama like this serves as fair counter-programming for adults looking to get away from louder, more explosive fare.
- The film marks the directorial debut of Alex Kurtzman who, alongside writing and producing partner Roberto Orci, has produced a solid resume over the years.
- The recognizable ensemble cast could help draw the casual interest of a small audience.

- Competition is heavy that weekend and neither Pine or Banks have proven to be draws on their own yet.
- Screen count could be an issue.
- The plot seems potentially off-putting for mainstream audiences.
- Kurtzman's (and Orci's) previous successes were cut from the blockbuster cloth that this film is clearly not a part of.
- Women will go see Magic Mike over this.  It's that simple.