New York, I Love You

Like its Parisian predecessor Paris je t'aime, New York, I Love You is a series of loosely connected vignettes, set to evoke love-based sentiments as they pertains to its titular city. Altogether, the eleven directors-10 head the various shorts, the 11th congeals them into a semi-cohesive singularity-yield an expectantly varietal end product that, despite some amusing anecdotes regarding cultural boundary, is largely bereft of insight. Still, there's some charm to be found in New York and its swirling narrative focus. As each director paints their own version of Big Apple milieu, viewers can enjoy the tonal flourishes of the film's better segments-which are few and far between-and take solace in the brevity of its bad ones. Nonetheless, New York was given the cold shoulder during its initial release, due to a low theatrical rollout (a high of 119 screens) and an unknown directorial ensemble (Brett Ratner being the most recognizable name for American audiences). It grossed a mere $1.58 million during its 8-week run. 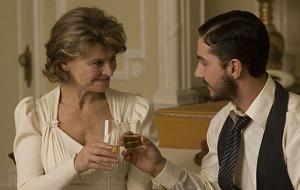 Though not the film's greatest sin-but perhaps the one that best sums up its shortcomings- New York overly romanticizes its inborn theme of metropolitan versatility without ever exacting a realized sense of variety. To put it simply: the movie is a startlingly generic portrayal of a city that's anything but, and, to make things worse, it's strewn together with an equally generic sense of urgency. The opening sequence employs this sentiment readily, what with its feverish editing and headstrong characters that oh-so-daftly-scream "New York!" Perhaps this is the problem. Maybe those involved are just too far removed from the city to address its entity with any bit of nuance. This would explain why most segments habitually posit geographical posturing or cultural differentiation in order to make some awkward stabs at characterization. Still, it's not fair to say that the entire film is guilty of such transgressions, as some of the stories are tolerable, others even good.

Shekhar Kupar handles his short with an indelible grace; his lens is delicate and reassuring. Incorporating a variety of framing devices, Kupar hones his story-which reads like a more melodramatic, diet version of Raoul Ruiz's Three Lives and Only One Death and feels like something shot by Carlos Reygadas-in a manner that elicits some rather stirring thoughts of longing and temporal passage. Though not perfect, Kupar's contribution is the most confident and, subsequently, modest piece of this love-based anthology. Other directors fare worse. Mira Nair, for example, attempts to expound upon the social barriers that result from devout dogmatism, but her premature flares of purported poignancy make for disaster. She, like some of her peers, gets too caught up in presenting too much during her limited screen time and, as a result, is forced to wrap things up with some unintentionally amusing summations. Meanwhile, other directors-Ratner, Allen Hughes, Yvan Attal-shape their narratives as something akin to a lengthy joke, with exposition giving way to set-ups and climaxes taking the form of proverbial punch lines. These installments feel more wholly realized than Nair's, but lack the command and distinctiveness of Kupar's work.

As a whole, New York is a decidedly mixed bag of all-things-love, be it good, bad, or ugly. Unfortunately, these qualities are inherent to the feature itself. Looking for something to love in New York isn't far off from looking for real love in its feature city: you may get lucky, but not after putting up with a lot of crap.