When reimagining a cinematic figure as recognizable and, let's face it, beloved as Jason Voorhees, one must approach with caution. Though the original films are hardly infallible, they do well enough in eliciting laughter and surprise and also serve to perpetuate the canon of classic horror films. In this, I was intrigued by the modern day update, if only to see how sophomore director Marcus Nispel would handle Jason's mythology. Apparently I wasn't the only one who was curious-Friday the 13th opened strongly, though its popularity was short-lived. In total it garnered a heavily front-loaded $64.9 million domestically, numbers good enough to keep the series afloat. 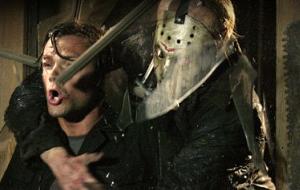 Through and through the film is a glossy bastardization of the series. A twenty-some odd minute prologue paints an introductory picture of the movie's tone-one that's unapologetically blood-soaked and self-aware in its gratuitousness. Its predecessors were also vehicles for violence and nudity, but never without a dash of camp. Nispel's vision is one devoid of fun, sans a spectacular exchange by a couple in the throes of passion. It seems his idea of updating the series is to merely rehash its most basic plot points while smattering it with as much bloodletting as the MPAA will allow.

No time is wasted on expository matters, as the film is one about immediacy. The opening credits provide a bit of a back-story to those unfamiliar with the legend-Jason drowned at Camp Crystal Lake, his mother exacted revenge, he witnessed her beheading, now he's angry. This element is presented with about as much detail as I've provided here, and this relative lack of concern for character development extends beyond a lifeless killer. Victims are even more clichéd than their 80's counterparts, making their actions all the more obnoxious. This detachment from the real also depreciates scares, as these characters can hardly be seen as actual people. Also discarded are notions of psychological damage being inflicted on survivors-a running theme in past installments. In this, Nispel can kill and maim characters without his audience feeling a conscience connection to them, a movement that plays to the philosophies of Rocky IV villain Ivan Drago: If they die, they die.

The main problem with horror remakes such as this is that directors insist on eschewing the fantastic, instead opting to set their film in a world that's reflective of our own even when the characters don't. Everything is overly explained through one means or another, which strips the story of any mystique. The rebooted Jason now has the ingenuity of an MIT grad and a network of tunnels exists underneath the campgrounds, allowing the killer to more efficiently stalk his prey. It's all so uncannily engineered. Nispel fails to realize that fears are often illogical forces that exist within us, and that sometimes the scariest things (like Jason's stealth) are more effective when left up to the imagination.

For those wondering, the picture largely abides by the Rules, but woefully treats them as givens as opposed to addressing them in an interesting way. Still, genre fans will have enough fun playing guessing games as to who's going to meet what fate and when. The death scenes themselves are fairly creative, but this isn't what I consider a huge positive. I would have preferred seeing such creativity channeled towards the film's more pressing matters but, alas, Nispel seems content in wayward vision. Instead of being the culturally updated homage to classic slasher flicks it pretends to be, Friday the 13th is a trite visceral blast. If deciding to rent it, check your brain at the door.